With world class capabilities in pure and applied planetary research, our Space Science and Technology Centre strengths are recognised by the global community. 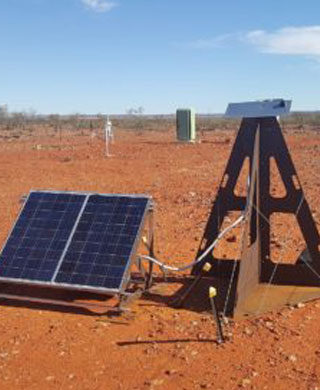 The Desert Fireball Network (DFN) aims to recover meteorites with orbits, by observing them enter the atmosphere. This operation forms the central node of the Global Fireball Observatory and operates as a full-stack science team, from data collection to science outcomes: 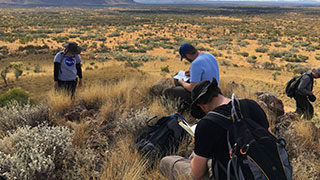 Earth has been bombarded since its formation over 4.5 billion years ago. However, the global record of impacts is limited to just ~190 confirmed impact craters or their eroded remnants, and a handful of ancient ejecta horizons. This is far fewer than predicted by any models of impact flux of the inner Solar System, and is largely because processes on Earth’s dynamic surface erase evidence of impact craters over time. The known craters range in diameter from a few metres to a few hundred kilometres across, and range in age from a few thousand years to approximately two billion years. Yet, only a small proportion has been dated precisely (Jourdan et al.). Better age constraints would permit the true consequences of ancient impact events on Earth’s biosphere and atmosphere to be tested, such as mass extinctions and climate change, as well as providing better empirical constraints on impact flux models.

Recent research at Curtin has focussed on the development of new approaches to identify and date terrestrial impact events to improve our understanding of impact structures. We specialise in careful characterization of target rocks and minerals combined with high-resolution isotopic dating and numerical simulations at a range of scales. 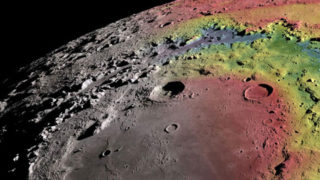 Planetary surfaces provide clues to the evolution of a solar system body. Craters are the result of one of the most important processes to effect planets, asteroids, and moon. High-speed meteoroid impact cratering is a fundamental geologic process that affects the evolution of the entire solar system. Unlike on Earth, most planetary crusts are long-surviving witnesses of impact bombardment, and this knowledge helps us understand the evolution of the solar system. The cratering record of a planetary body offers clues to the relative surface age, impact size and frequency and its crustal structure in space and time. Methods used to unravel these processes include crater counting, numerical impact modeling, impact experiments, accessory mineral dating, mineral deformation studies of meteorites and terrestrial rocks as well as broad range of lunar and planetary remote sensing data. 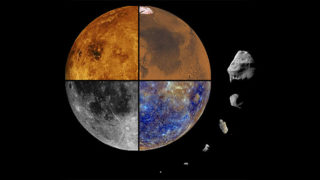 Planetary bodies in the inner Solar system share a common history, yet appear to be very different. Their differences and similarities probably were established very early in their history and determined their subsequent evolution. Comparative analyses of magmatic processes, bombardment record, volatile inventory as well as interactions between different chemical reservoirs on different planetary bodies helps build an understanding of major processes responsible for planetary formation and specific paths taken in the evolution of different planets. All that ultimately relates to the profound questions of how conditions favourable for life can be established and sustained in a generally hostile environment of space.

A combination of different methods, ranging from remote observations of large areas on the planets to analyses of micrometre size grains found in the available samples representing different planetary bodies are utilised in this quest. These samples include basalts, which are the most common rock type on the planets in the inner solar system and often preserve record not only inherited from their sources in the planetary mantles, but also of interactions with the planetary atmospheres and hydrospheres (when present) acquired at the time when basaltic melts reach surface. This research is also strongly focussed on a number of accessory minerals, which have been proved to provide important chronological information as well as preserve chemical and isotopic signatures indicative of the conditions of their crystallisation and modification. Consequently, these minerals, such as zircon and phosphates, carry important information about planetary environments that existed at the time of their formation.

Find out more about research careers with the Space Science and Technology Centre.